Warm, friendly and generous with their time, the staff at Cardiff Bus Company are as pleasant hosts as you could wish to meet. You wouldn’t believe they have just completed a process of unprecedented upheaval – with yet more on the way.

Simon Mohammad, Head of Operations explains: “This has been our biggest change in 30 years: we’ve had huge organisational changes, implemented two new computer systems and dispensed with the traffic office and moved our canteen.”

“It has been an intense period in which every part of the business has been touched. To deliver as we have has been nothing short of amazing; Debbie & Mark are heroes for the way they’ve managed it.”

Simon is referring to Assistant Head of Operations Debbie Newton and Operations Performance Supervisor Mark Moteane, who have spearheaded a project to redirect driver administration to the control centre staff, replacing an inefficient process that required three staff on duty from 4am to 7pm each day just to manage driver requests for holidays, swaps and shift information.

“Continuous,” is the word Debbie uses to describe the former experience: “The worst times were Sunday mornings: I would call in to see how things were going; you couldn’t even get through because the phone was always on.”

Having lived through it daily, Mark agrees: “You would start the day with a full head of hair and end with none!” The joke illustrates a serious point as the subject of stress regularly crops up as we talk. “People were constantly coming in to request overtime, rest days, holiday and lieu days. The phone would constantly ring, keeping you from the tasks you should be doing, like forward allocation.”

For Debbie, there were wider concerns: “The biggest problem was the footfall. It was easier for drivers to come to the traffic office desk than check the boards, so they would turn up not knowing duties – and allocation staff would face a queue of people at their desk.”

With the process for a driver to check holiday taking take three or four minutes, it is easy to see how a long queue could form. Aside from the obvious inefficiency, Debbie and Mark also cite the weight of pressure felt by the admin staff and potential for friction between the drivers and those processing their holiday approvals.

Cardiff needed to change the process entirely. Already using Trapeze’s Duty Allocation System (DAS), Simon was informed of a new online ‘self-service’ module called DAS-Web, which would interface with DAS and revolutionise operations by enabling drivers to log in to check and manage their own duties. 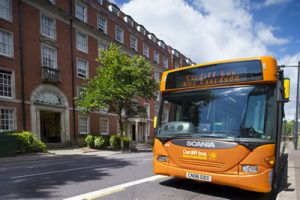 Debbie picks up the story: “I have been here long enough to remember life before DAS. We have a great relationship with Trapeze – the team are fab – but when I first heard what DAS-Web could do I was a little bit sceptical.”

Just six weeks in, that the promise has been met is beyond question. Cardiff’s traffic office is a sea of calm – in fact, the only driver we even see during our visit is Bob Stinton, who pops by to give us his view on things (more from Bob later).

The changes have enabled Cardiff to deliver on the ultimate objective of passing duty allocation to the control centre staff.  In doing so they have reduced staff handling admin from six to two – who are now able to enjoy their working environment, Debbie says: “They are less stressed and able to prioritise their work to be more effective.”

The flow of duty swaps is now entirely controlled by the office: “We put restrictions on swaps so drivers can’t double swap until the first one has gone through,” says Debbie. “It’s all so quick, and because the system enforces it we don’t need to get involved.”

This has meant a profound change for Mark: “Swaps were a pain: I would store them up each week and do them in one go on a Thursday. It would take two hours per week – and then others would come in after I’d finished. Now it’s a 15-minute job.”

As a result, the team have managed to close the traffic office on Saturdays and Sundays – staff have their weekends back.

Of course, Debbie explains, without drivers there’s no bus company: you need to look after those you have.”

Thankfully the drivers have been on board from the start: “It has been a culture change but we expected more opposition,” says Debbie. “Because the new processes are beneficial to the drivers it’s been an easy sell – they don’t waste Sunday mornings finding out duties and feel in control.”

Simon agrees: “It helps that the new system makes the drivers’ lives easier; it has been accepted by them all.”

None of this has happened by accident, of course. Simon, Debbie and Mark planned everything with meticulous care, including a crucial four-week workshop in the canteen to provide hands-on training and assistance for all the drivers.

The team quickly got the drivers on side with an effective blend of carrot and stick: “We guided the non-technical ones through; showed them how it works and gave them a manual with their own login details – but they had to sign to say they had received it so there were no excuses,” Debbie explains.

The forms were kept for a week while drivers transitioned: “After that we got rid of them and kept enforcing: ‘if you want to do something, use DAS-Web’. Now all the drivers love it,” she concludes.

Availability of the management team was critical throughout this process, with all numbers and email addresses published for queries. That the implementation went well is shown via a support email address the team set up just for DAS-Web – “It’s still empty,” reports Simon.

The driver we meet, Bob Stinton, is certainly a convert: “Checking duties and messages online helps. Before if you forgot your shift you would need to come in or phone. It’s very easy to use – and I’m not very good on computers. It works well on the phone.”

Debbie reveals that drivers are already showing admin staff how to do things: “They save the DAS-Web link to their phone’s home screen so they can immediately access it – just like an app.”

Simon is particularly pleased with the reaction from the drivers: “We have had drivers buy their first Smartphones because they are so excited by it – one even walked in with an iPad the other day! We have seen changes from drivers you never would have believed: one we were sure would oppose it now wants us to add message boards for driver communications. Another told us it’s changed his life!”

The fact that drivers no longer need to visit the office, combined with the convenience of communications, has meant there is no longer a need for the canteen to be next to the traffic office– but the team are keen that they don’t lose the sense of interaction and camaraderie among the drivers. Discussions are already taking place to see how DAS-Web could be used here, too. 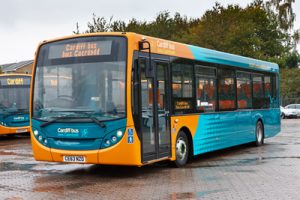 Speaking with Simon, Debbie and Mark there is a palpable sense of excitement at the possibilities. As effusive as they are in their praise, they are equally animated when making suggestions for new functions that could help their team and drivers. This is a new system and Cardiff Bus clearly are relishing being the first operator in the UK to use it.

This is an organisation that doesn’t want to stand still; where technology is used as a means to improve operations: whether that’s in Duty Allocation, real-time information, or their forward-thinking use of Social Media (used for service updates and marketing campaigns; 13,000 Twitter followers – and rising.)

“The restructure was the driver for the change and DAS-Web was the tool to deliver it,” says Simon. ”We looked at the cost of DAS-Web versus the benefits and it was a no-brainer.” Has that decision been justified? “Big time.”

With the driver communications processes revolutionised, Cardiff are already looking to the next challenge. They recently worked with the Royal National Institute for Blind People (RNIB) on a ‘Swap with Me’ event where a group of partially sighted and blind people swapped places with bus drivers to share the experiences and difficulties faced when travelling by bus.

There are also new buses on the way and CPC training planned for the Autumn. “It’s going to be a very busy period but we’re prepared and ready to face it,” insists Simon.

“This is a difficult area to work in because there’s no stability,” Simon explains. “We are a small city that hosts worldwide events (mostly sporting!) but we’re compact, so there is a knock-on effect with every problem. The transport infrastructure is about to change when BBC Wales Headquarters move to the site of the bus station in 2018. In April 2015 we move out, and in 2018 we move back in.”

“We face three years of instability, so we’re just trying to get everything working before that hits.

But don’t for a second be fooled into thinking the above is a complaint. As Simon concludes: “We are a capital city and an events city: we’re used to disruption and having to prepare and adapt.”

With all we have heard today we can well believe it. 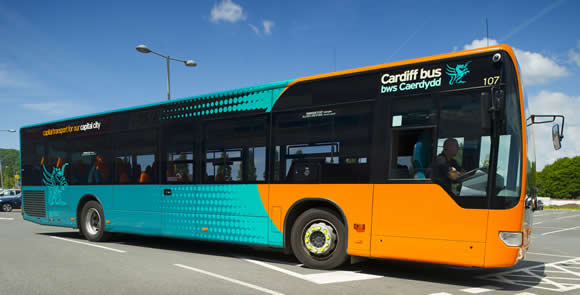