“Partially sighted people often muddle through with bus travel, but they find timetables difficult and feel that they have no options; that they’re always rushing to get to a bus”

Public transport departments across the country clearly understand the need to increase modal shift by convincing car owners to ride the bus. But have we done enough to cater for those with disabilities? This is an extremely complex challenge – but also one with huge potential: after all, if we can make public transport easier to use then we can increase ridership and perhaps also reduce reliance on other, more expensive forms of Local Authority transport.

One organisation ahead of the curve here is Gloucestershire County Council, where Transport Technology Officer Nick Bauer has overseen the development of a mobile app offering travel information to not only able bodied users but also partially sighted passengers, for whom use of public transport has historically been at best cumbersome and stressful; at worst dangerous or even impossible.

As many will already know, until now the most common solution for partially sighted passengers has comprised audio equipment installed at bus stops, which read out announcements when triggered by passengers’ key fobs.

Having researched such solutions, Nick wasn’t convinced: “We spoke to many Local Authorities who historically had implemented this technology, but were concerned by stories of specification changes which render key fobs inactive, requiring replacement of all fobs in circulation. Some users were apparently carrying three or four fobs, never quite sure which to use – far from ideal for someone who is partially sighted.

“And of course that’s without considering the cost, both of the fobs themselves and the audio equipment at the stops. We have limited budget and we needed a solution for all 6,500 stops in the county, rather than for the handful where we could afford to deliver it,” Nick says.

At the same time, Nick is quick to point out the limitations of the fob-based solution for the public: “Why should we ask passengers to carry multiple fobs, or remember which the current one is? Why should they face ‘pot luck’ regarding whether their bus stop is one of those with the equipment installed? And how would you decide which area of the county and which bus stops are priorities?” he asks.

Besides all that, are at-stop audio announcements even the right approach? Some partially sighted people may not appreciate that information being advertised in such a public way.

Nick decided to look for something new. “As Trapeze already supplied our RTPI system, we asked them to design a solution without the high costs or risk; one that could be affordably delivered across every stop in the county,” Nick explains.

The result is Gloucestershire’s new Talking App, which benefits passengers in three key ways: firstly, by using audio commands to guide them to their nearest stop; secondly, by telling them when their chosen bus is due to depart; and thirdly, by warning when they need to alight the bus.

Many of the features (such as a planned development to add a timer that warns passengers when their bus is a specified number of minutes away) will have value for all users, but speaking to Nick it becomes apparent that many of the convenient and user-friendly functionality we see in such apps – favourite locations, regular journeys and so on – are absolutely essential for those with disabilities.

To better meet these needs, the app was designed with input from the local disability group, Gloucestershire Voices (it is actually the latest of several accessibility measures worked upon by the two organisations; one example is the Easy Traveling website, developed by Nick’s colleague Natashia Reeves and designed to be easy to use, with a simple layout that makes is easier to obtain travel information and make informed journey plans).

“Partially sighted people often muddle through with bus travel, but they find timetables difficult and feel that they have no options; that they’re always rushing to get to a bus,” Nick explains. “We’re making it easier to fit bus travel into their regular day, rather than forcing them to worry about building their entire day around travel.

“Our aim is to make bus travel much easier and less of an ordeal by providing complete information in an easy to read layout. Bus users should be able to access all the information they need regarding buses arriving at their stop, so they are not rushing to get the next bus. Maybe they have time to get a coffee, go to the bank, or buy that last minute item before catching the bus. And by putting this information into the palm of their hand, we’re giving the user control over their travel.”

One crucial element is the app’s ‘handholding’ feature, which helps passengers understand where they are within their route: “It counts down to each stop, so you can see exactly where you are at each stage in the journey – and it’s really responsive, which provides assurance and confidence,” Nick explains.

Indeed, such is its intuitiveness, Nick even sees a travel training potential here: “Gloucestershire Voices already run a ‘buddy system’ to help people get used to bus travel,” Nick says. “We hope the app will reduce the number of buddy journeys needed before someone can travel alone.”

Intriguingly, if successful this type of technology could even offer essential budget saving for Local Authorities by helping to transition passengers from demand responsive to mainstream services without extensive travel training schemes.

One app to rule them all

Interestingly, because Gloucestershire Voices represents more than 100 disability groups, there’s also potential for future versions of the app to take on wider requirements, becoming a true mobility support tool for all. This, of course, is exactly as Nick planned it: “The initial version has been created for the partially sighted, but we want it to work for everyone; why have different versions for different groups? We want one app to rule them all!” he says.

“We are hoping to add some improvements in later versions so that with a couple of taps on the settings, the app can become even more user friendly for those with disabilities,” Nick says. “For example, changing the background to yellow and lettering to black, which is a colour scheme favoured by RNIB and partially sighted users. We aim to continue to improve the app based on user feedback.”

The app, which is available for iOS (iPhone), Android and Windows phones, is intended as a key part of a launch for Gloucestershire’s improved RTPI system – which can now be accessed whenever and wherever required.

Nick concludes: “Travel information can be confusing for anyone, whether partially sighted or not. We’re making it easier for everyone; encouraging them to use the bus by making sure they can get from A to B with a minimum of fuss.

“All kinds of people feel intimidated by bus travel – this app helps them all. I’ve tried a number of apps, but none do what ours does. Others don’t speak to you or offer countdowns to each stop. Our app takes the best bits from all the others – and we know it’s good because other authorities are already asking us about it.”

He’s right, of course. But the Talking App is also a significant step towards a more accessible public transport for all. It will be fascinating to see where it goes next. 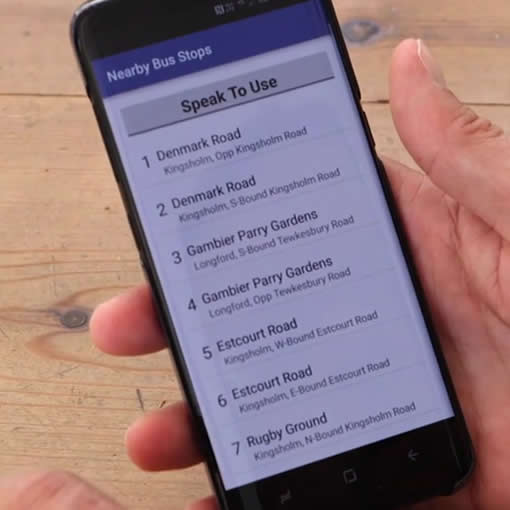